A week of Internal arts
in the heart of Scotland 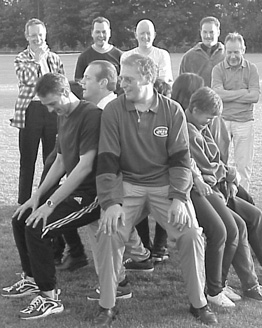 Well, the week kicked-off as the planes and trains arrived (sorry, no boats), mostly on time and without hitches, except for the luggage that took a 5 day short break from its' owner. In spite of poor mobile phone reception delegates from the USA; Finland; the Netherlands; France; Germany; Italy & Hungry were greeted and kindly despatched to Stirling, thanks to voluntary chauffeurs. Meantime others from throughout the British Isles descended upon Karen (the welcoming committee), who was holding fort at Stirling, issuing directions, keys and those 'all important' meal tickets.

On a not so bright Saturday morning by the tree, all were welcomed by Ronnie & Bob to the 5th Tai Chi Caledonia. One by one the instructors were welcomed and introduced to the congregation, each gave a brief synopsis as to the content of their weekend workshops. Following the house-keeping instructions and merchandise promotions (don't forget the book shop) a major decision had to be taken before the workshops commenced........it was dull and overcast .........indoors or out?

The hoard of delegates migrated to the sports field in pursuit of their chosen workshop - and the camera rolled. The workshops being presented in pairs meant a large number of participants at each, but fortunately space was not a problem. Each workshop was scheduled for approximately 1and a quarter hours, with three before lunch and three after. As 5 o'clock drew closer everyone was ready for dinner.

Whether you're home or away, a Saturday night without a boogie wouldn't be right, so some danced the night away at the disco in the .......... Bar, whilst others caught up with old friends. Individuals having not seen each other for a year surely had much news to share - emails' not quite the same. Many took the opportunity to chat with those they'd never met, but had become acquainted during the workshops. Although the bar and disco had finished, the chalet gatherings had just begun.

Although the workshops were short, so much was imparted to the participants and certainly much will be retained, utilised and pondered upon, long after Caledonia 2000. The instructors were refreshing and the enthusiasm for their art exuded. Participants could feel the sincerity from which the instructors imparted their knowledge and experience. In addition to the qualities of the instructors, the participants also exercised such qualities towards each other, thereby giving rise to a platform conducive to experimenting with new material. 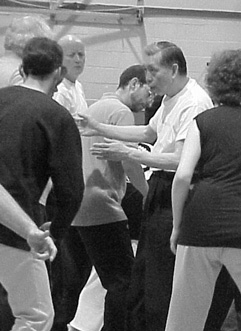 Monday morning, the weekenders departed, the weekday delegates arrived - and the show continued. Two workshops a day for the following four days, but hey, that wasn't all. The evenings brought the opportunity to learn, develop and master the art of 'pushing hands'. The sessions encompassed complete beginners and the experienced competitors, some played until dark, or until someone suggested opening a bottle of wine. The evenings also became a great time for theorising: the body mechanics of the three nails principle gave rise to much debate, which continued and extended as each day passed; the use of yoghurt as a sunburn remedy (It appeared to work) and there was plenty on alternative health matters, including the pros and cons of yoga versus tai chi. Many utilised the early morning and evenings to practise their own form either individually or with others. A Sabre demonstration in the moonlight was also performed - thank you. Some instructors gave additional informal sessions early morning or after dinner - again, thank you on behalf of all those who participated. The dedicated were up practising with the sunrise, before breakfast.

Wednesday afternoon workshops were delayed in order for delegates to take the opportunity of visiting the Wallace Monument, where a talk on Scottish Weaponry had been arranged. This was the first year such a talk had been organised and the consensus of opinion proved it worthwhile.

All weekday workshops started in the gym, but once that sky showed a glimmer of hope the opportunists evacuated to the great outdoors. The 'high spirit slayers' made haste to the tennis courts, and devoured ? the area available, fortunately, the 'penguins' got there first. The 'Qigong Kranes' fled to their nest, and were only seen again socially. The trainee pizza waiters slithered in and out of the human posts in opposite directions, sustaining no injuries. The 'Qigong Trees' stayed firmly rooted despite the wind howling and the sea roaring - but the midges came. The 'warring warriors' battled elegantly with their sticks against the grass, whilst the 'three nailers' were so far rooted that the 'wee man' had to stay and defend the gym.

Soon it was the last night, the opportunity to acknowledge the organisers assistants (Karen & Alison), arrange transportation home and to give feed back upon the week. With business finished, the party began, and it continued into the small hours. For those who didn't see the sun rise (I know one tried so hard to stay awake), it was fantastic. The sky was overcast, but the sun shone from behind the clouds making the hills appear golden - perhaps you'll see it next year.